CERN is the world's leading laboratory for particle physics, operating a complex chain of particle accelerators to reach up to 7 TeV energy. Beams extracted from the smaller accelerators are also used for fixed target experiments. About 50% of all 1.4 GeV protons produced at CERN from the PSB synchrotron hit targets of the ISOLDE facility to produce a large variety of radionuclides in the so-called ISOL process, which results in mass-separated pure and intense radioactive ion beams. They are used for nuclear and particle physics, solid state physics and biophysics. To make medical radionuclides available much more frequently, the new MEDICIS facility uses a second target station downstream of the ISOLDE target. After irradiation, the radionuclides are extracted and mass separated off-line, providing batches of high purity radionuclides. MEDICIS, commissioned in 2018, can also mass-separate radionuclides produced at high flux reactors (e. g. RHF or BR2) or cyclotrons (e. g. ARRONAX). Although newly created, MEDICIS relies on the 50 years of experience of ISOLDE, which is leading this field world-wide; the groups operating ISOLDE and MEDICIS are largely overlapping, thus guaranteeing a direct knowhow transfer.

MEDICIS will provide as “day 1 radionuclides” the neutron-deficient Tb isotopes Tb-149, Tb-152 and Tb-155 as well as Tm-165 that acts as generator of the Auger emitter Er-165. Also, mass-separated Ac-225, free of Ac-227 impurities can be produced. In collaboration with other PRISMAP partners MEDICIS will perform off-line mass separation of high purity samples of Er-169 and Yb-175.

The ISOL process is intrinsically very universal, thus an expansion towards other radionuclides is mainly conditioned by an individual optimisation of dedicated targets and ion sources to increase the activity levels and the development of the downstream radiochemical separation processes to be performed at other PRISMAP partners. 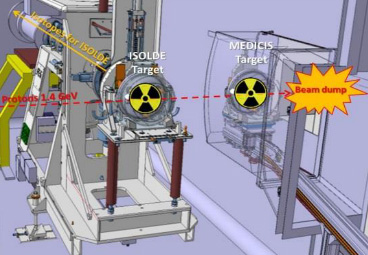